Breathing is necessary for staying alive. When we breathe air goes through your nose to your lungs and contains much needed oxygen. The oxygen enters your bloodstream and travels to your organs and other tissues. Breathing is a fast process and most of us pay little attention to it on a daily basis unless we are encountering some form of difficulty breathing or the air quality is poor.

I live on the East Coast of Australia and we are currently experiencing devastating bushfires which directly affects the air quality. The smoke in the air is irritating the eyes, nose and throat but breathing in these particles means they also travel down to your lungs and can cause respiratory irritation and aggravate conditions such as asthma, bronchitis and other existing lung conditions. This is a picture taken this morning at Brisbane Water in Gosford on the beautiful Central Coast, NSW Australia. 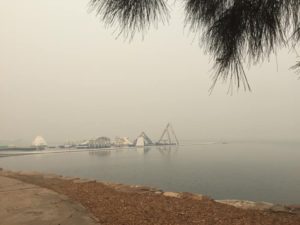 Now this is what it look like normally when you visit Aquasplash in Gosford on Brisbane waters. 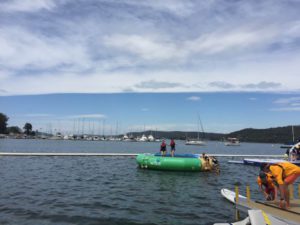 Our respiratory system is amazing though and the lungs have defence mechanisms along the respiratory tract to protect our lungs.

The nose is the first line of defence because the nose filters the air and prevents large particles from entering the respiratory tract. You can remove these large particles by blowing your nose or it gets removed when you sneeze.  That is why it is important to breathe through your nose and not your mouth.

Smaller particles pass through though but when they get to the windpipe and the tubes that lead to the lungs they encounter the second line of defence. These tubes have cells that produce mucus that traps the particles.  The walls of these tubes have tiny little hairs that move the mucus upwards to your throat which causes you to either start coughing or you can spit it out or you can swallow it down.

Any particles that reach the lower part of the airways encounter cells called macrophages. They are the cleaners of the lungs and the basically swallow the particles and move them to the part that is covered by the tiny little hairs so they get coughed up.

As you can see our lungs were created with several defence mechanisms in place but what is concerning is the particles that still gets through.  If there is a large amount of particles in the air then even the macrophage system might be too bombarded and fail. The issue is really the particle size as well because they are so tiny. These particles settle down in the lung tissue and cause injury to the lungs. The health hazard doesn’t just stop at the lungs because these particles can actually get into your blood and then affect your organs.

How can you help your lungs after exposure?

Water helps to flush out the body. Water helps the body to produce more mucus to help fight the invasion of particles.

Hot drinks like herbal teas rather than hot beverages that has milk or dairy in them because they can increase mucus and tax your respiratory system even more. If you like herbal teas then sip on some ginger tea, peppermint tea, elderberry tea or elder flower tea.

Thyme essential oil contains anti-microbial chemical properties.  Thyme oil will get rid of any congestion rid the body of toxins so a great detoxing oil.

If you don’t have a bottle of Thyme essential oil then grab a handful of Thyme leaves and pour some boiling water on that in a large bowl. Throw a towel over your head and lean over the bowl and breathe in the vapours for at least a minute or two.

Now I normally put my bowl inside the sink so that I know it is safe and won’t move around.

If you have Thyme essential oil then add a couple, yes that is only 2 drops of oil to a boiling bowl of water and use that as your steam inhalation.

You can also inhale the Thyme oil straight from the bottle.  Just be very careful that the bottle does not come into contact with your skin because Thyme is a strong oil and it needs to be diluted with a carrier oil for topical application.

Other essential oils that can be used in steam inhalation are

Ginger oil that reduces mucus and fight inflammation of the respiratory system.

Peppermint oil helps to open up the bronchial passages and clean the lungs.

I would however recommend to use one oil at a time and only a couple of drops at a time when the smoke has been hanging in the air for such a long time.  Your body already has a lot to deal with you don’t need to add to it with a lot of essential oil particles as well.

Vit C is an antioxidant . Eating apples,cherries, citrus fruit and berries which contains not only vit C but also Quercitin that is anti-inflammatory and a natural antihistamine.

5. Diffuse essential oil in your house.

Lemon purifies the air HOWEVER when the smoke hangs around like a thick blanket for weeks and the house is closed up I would say be cautious. You don’t want to add more particles to the air in your house. I also would not recommend using oils that are high in monoterpenes such as citrus oils and pine oils. Antioxidant  oils would be better such as Thyme, Clove  or Oregano.

Diffusing Lavender at bedtime is helpful to calm the nervous system and therefor making breathing easier.

The best thing you can do though is get a good quality air purifier.

6. Get a a good quality  air purifier.

What can you do to minimize exposure?

1. Stay indoors and keep your windows and doors closed

Some mornings we wake up and you can smell the smoke in the air. If there is a break in the air quality then open your windows and get some fresh air in but then close it again when the smoke gets really bad.

I have had this lingering slight headache and this lethargic feeling over the last few days and that is just from the exposure to the smoke in the air.

When you exercise your breathing increase or rather you will take deeper breaths which will mean that you will breathe in more of these particles.  It is safer to exercise indoors like at the gym which is airconditioned.

Not all masks are the same and the majority of masks will prevent the bigger particles to penetrate but the issue really is the smaller particles.  So you really want to go with a N95 respiratory filter. If you can get your hands on a N99 or N100 mask that is even better. The number means that is the percentage of particles that is 0.3 microns that is filtered out .

Check out the reviews from  https://thewirecutter.com/reviews/best-respirator-mask/

But be aware that masks can make matters worst because if they seal properly they do get hot and uncomfortable and then you tend to breath deeper.

4. Get a good qualtiy air purifier

It is more important to keep cool and keep well hydrated.